Namibia is a vast, harsh, arid land of coastline, desert and mountains. But, there is life here. Go to Etosha in the summer and you could see an abundance of animals gathering at the waterholes.

Elsewhere, surviving can be tough. Incredibly tough. But, astonishingly, despite being one of the driest places on earth, some of the largest animals on the planet actually thrive in Namibia. And some, like the desert elephants themselves, have even managed to adapt. In this article we’ll start by looking at how the weather affects wildlife, before offering you a guide to what’s on offer where. We’ve also included all wildlife - not just game animals - and put together some brief notes about the Big 5, Small 5 and the Marine 5.

Let’s get straight to the point. Animals. You want to see them. Two words: dry season. Places like Etosha National Park aren’t densely vegetated so when it’s dry and the animals are thirsty, you can actually see them as they drink.

So, when does the dry season start? Water levels start dropping from March, albeit slowly at first. By June/July, things are hotting up. Literally. Animals seek out water throughout the day now, so game viewing is hitting peak season. They often gather en masse at waterholes. In the north of Namibia, the rains can start as early as December but game viewing can still be excellent. And January to April are far from a write off as this is when many of the animals give birth. It’s also not peak season for tourists so you have more room and you may get lucky and see their young.

Location in Namibia makes a big difference. If you want to see an abundance of wildlife you’re better off heading to the national parks and private reserves. Elsewhere, there’s a real feeling of isolation and solitude which can make a sudden, unexpected wildlife sighting utterly breathtaking.

Let’s start with Etosha, the most famous of Namibia’s eleven national parks. It’s home to 114 mammal species - 8 are endemic and several are rare and endangered. Get a map and head to the waterholes. There is a network of perennial ones which draw large herds of game from the arid savannah grassland and thorn scrub. In summer it’s easy to watch them drink. There’s an abundance of desert adapted elephant, as well as lion, even cheetah if you’re lucky. Lions are a key species in Etosha and you could see them hunting herds of zebra and gemsbok around the waterholes. Look out for springbok, blue wildebeest, meerkat, ostrich and bat-eared foxes. The rare black faced impala and damara dik-dik are also here and they’re only found in one other place - across the border in Angola.

This is a private reserve in the Otavi Mountains. It’s not huge, 120 sq kms but it’s easy to explore on foot. Think gorges, caves and bushveld. Eland, wildebeest, kudu and oryx are frequently seen, along with predators like leopard, cheetah, hyena, honey badgers, jackal, serval and caracal.

This region was formerly known as Kaokoland, to the south is the formerly named Damaraland. Desert-adapted elephants wander freely, digging into dry riverbeds to reach water from subterranean flows.

The black rhino was almost extinct here 30 years ago but today this area has the largest number of free roaming black rhino in the world. You might also spot desert adapted lion. They live in the mountains, coastal regions and between the Kunene River and the lower Kuiseb River. Zebra and oryx are easier to spot.

Want to see hippo and crocodile? Head to the Zambezi Region (formerly known as the Caprivi Strip). This is north east Namibia and is the panhandle sticking out of the country. There are often heavy rainfalls in the summer and that combined with flowing rivers offer a different wildlife experience to the rest of the country. Very good for seeing buffalo and there are thought to be several hundred African wild dog too. These elusive creatures are Namibia's most endangered mammal species. Fast moving, they can cover 50km in one day.

One word: cheetah. The world’s fastest land animal. Namibia is thought to have about a quarter of the world’s total cheetah population, the majority of which live on privately owned land conservancies. Conservation groups have worked hard for years to help build up populations, particularly at Okonjima Nature Reserve.

Shy and extremely rare, pangolins can be seen at Erindi Private Game Reserve.

In 2010 the Namib Skeleton Coast National Park was formed by merging several parks. It’s now the biggest protected area of Namibia. It stretches along the entire Atlantic coastline from the border of Angola in the north down to the border of South Africa in the south.

Want to see seals? Head here. This northern stretch is where you’ll find one of the world’s biggest breeding colonies of Cape fur seals. Estimates vary from 100,000 to 200,000 all living at the Cape Cross Seal Reserve. Come in November and December and you’ll see their tiny pups. Unbelievably cute but unbelievably smelly, you have been warned. Hyenas and jackal also patrol the beach.

There’s marine life a-plenty along this stunning coast. You can see seals, dolphins and turtles off Walvis Bay and if you come between June and November you could see whales. The humpback and the southern right.

The south isn’t a prime big game region but you can still see the animals of the Namib Desert. We’re talking oryx, ostrich, springbok, kudu, zebra, giraffe, hartebeest, leopard, hyena, jackal and fox. Particularly if you head to the NamibRand Nature Reserve.

Talking of which... this private nature reserve was established to help protect and conserve the ecology and wildlife of the south- west Namib Desert. Work goes on to both protect migratory wildlife routes and to protect biodiversity. It is also huge. 200, 000 hectares which probably makes it the largest private nature reserve in Southern Africa.

This place is famous for the giant sand dunes of Sossusvlei. Animal wise look out for springbok, gemsbok, baboon, leopard and even meerkat.

Remember those horses mentioned in Aus? Well, they roam down here too, near Lüderitz. These beauties are the only desert-dwelling wild horses in the world.

There are mammals a plenty in Fish River Canyon. Zebra, kudu, klipspringer, baboon and leopard. Look out for dassiesband dassie-rats too.

A Brief Guide to the Big 5

Some people love to tick off lists, if that’s you the Big 5 might be top of your’s. It refers to five African game animals: lion, leopard, elephant, buffalo, and rhinoceros. They were called the Big 5 because big-game hunters found them difficult and dangerous to track and hunt them on foot. If you killed one, you won a trophy, and they became the most sought-after African animals in the big-game hunting world. Unfortunately, most of them are now on the endangered/vulnerable lists and there are strict laws in place about where and when you can hunt.

Nowadays, African safari operators borrow the term Big 5. It's a true marvel to see them in their natural habitats. One of the reasons everyone loves a safari.

Guide to the Small 5

Guide to the Marine 5

So that’s a whistle stop tour of wildlife in Namibia. Do you want to know what the national animal is? The spiky horned oryx. Apparently chosen due to its courage, elegance and pride. They’re good at wandering far and wide in their search for food and water and are pretty much the quintessential Namibian desert dweller. A survivor, strong and thriving. 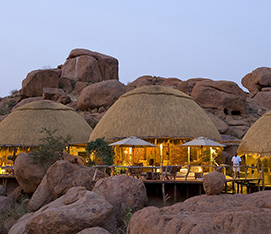 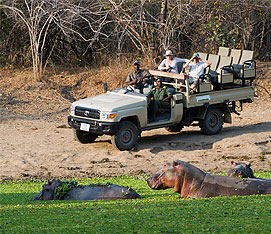