Namibia
Star dunes with up to five crests rise 300m into the air and rank among the biggest in the world; the dune valleys are marked by vast clay pans where the Tsauchab River gave up its fight to reach the sea more than 60,000 years ago. 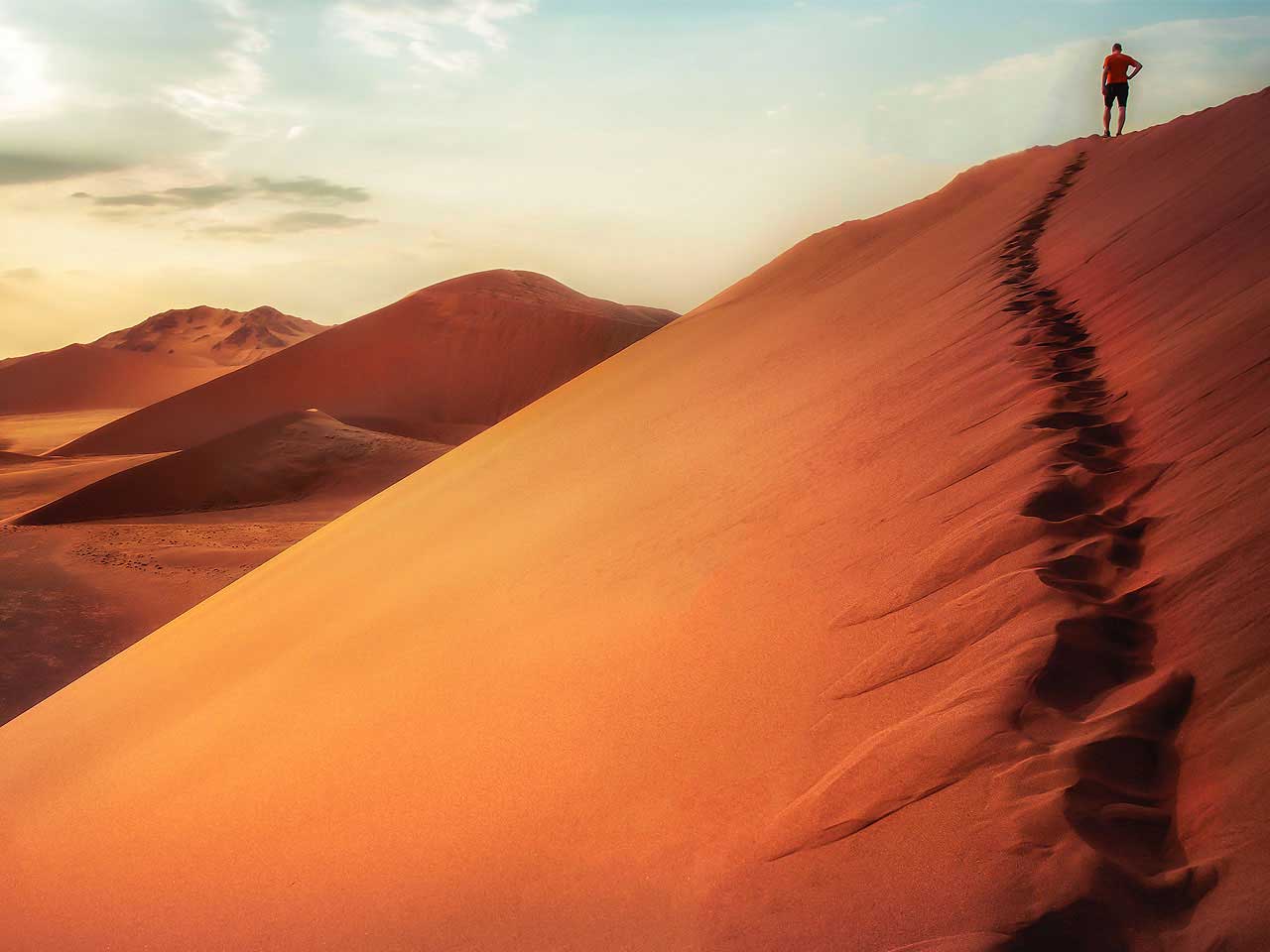 Besides the dunes and pans of Sossusvlei and Sesriem Canyon, a sideshow of activities and sights has developed around the region and there are plenty of game lodges that provide additional desert-adapted activities.

Plants and birds are the dominant life form in this dessicated realm and they support a tiny world of mammals, reptiles and insects that, in the absence of coastal fog, seldom wander far from the rivercourse and its pans.

Sossusvlei is one of four pans in among the towering dunes, the others being Dead Vlei - so named because of the petrified camel thorn trees that survived for a few hundred years after the dunes blocked the river; !Nara Vlei - which has a number of endemic !Nara bushes eking an existence from the scarce water that occasionally makes it down from the Naukluft Mountains; and Hidden Vlei which is a barren amphitheatre some distance beyond Dead vlei.

To protect the fragile wilderness, only day trips are allowed into Sossusvlei. You can drive the 60km road lined with enormous iron-oxide dunes, precious gemsbok and gnarled acacia to within a few km of the pans and dunes in a 2WD.

If you don't fancy the extra hike you can get to within a short walk from the pans in a 4x4 and some judicious sand-track manoeuvres; or you can use the shuttle service. Beat the haze and the people by getting there at sunrise when the dunes are burnt sienna and the sky is almost too blue for your polariser.

Give yourself an hour at sunset to climb Elim Dune, which is about 5km from Sesriem and you'll probably want to stop and get some postcard shots along the way.

Sesriem Canyon is a narrow gorge 30m deep that is evidence of shallow seas and wet periods of days gone by with layers of round eroded pebbles embedded in the calcrete strata. The canyon is usually filled with pools of water good for a refreshing dip after the exhausting dunes.

Ballooning over the Great Sand Sea gives an excellent perspective of the expanse of dunes and the total silence - between flame-blasts - lends an eerie touch to this exhilarating experience.

Sossusvlei brings out the creative photographer in everyone - provided you beat the mid-day haze. Surreal shapes, colours, textures and landscapes are accentuated by the ancient trees and desert-adapted wildlife like gemsbok, springbok and ostrich.

The place where time stands still
Scratch the surface of the the world's oldest desert and you may find little more than an endless expanse of parched plains and dunes with a few dry river beds and rocky mountain ranges cutting up the horizon.

Delve into the details of this 15-million-year-old wilderness area and you will find a fascinating world of plants, insects, animals and birds that have adapted and thrive in the only true desert biome in southern Africa.

At just under 50,000sq km, the Namib-Naukluft Park is one of the largest conservancies in Africa. The park is an amalgamation of several reserves and the landscape and habitats change dramatically from north to south and east to west.

Sossusvlei and Sesriem Canyon are synonymous with the park but there's a lot more to see and do that rewards a slow meander from one end to the other.

The Namib Desert supports a total of 650 plant species - a quarter of all Namibian flora - and a tenth of these are endemic to the desert. The welwitschia is an ancient tree that is a family, genus and species combined. Discover beetles with drain pipes, dancing lizards with double tanks, burrowing geckos, desert adders, pure-bred wild ostriches, water-carrying Namaqua sand grouse and meditating moles. Namib specials include Barlow's lark, Benguela long-billed lark, Damara tern, Dune lark, Gray's lark and Rüppell's korhaan.

The NamibRand in the south is one of the largest private reserves in Africa. Stretching south-west from Sesriem towards Betta the park covers 2,100sq km of desert dunes, vegetated valleys, vast plains and towering mountains.

Sossusvlei and Sesriem Canyon are the focal point of the park and there are many lodges and camping options in the area. The 60km drive into Sossusvlei from Sesriem takes you through towering dunes and grassy plains and ends on the edge of the Great Sand Sea with spectacular scenery and some of the world's tallest dunes.

The Naukluft Mountain Zebra Park was proclaimed in 1968 to protect a rare breeding herd of endemic Hartmann's mountain zebra; the 1979 amalgamation with the Namib National Park and outlying areas allowed for migration of gemsbok, zebra and other game into the new Namib-Naukluft Park. The mountains support rock-dwelling plants, aloes and trees: look out for euphorbia, acacias and quiver trees; the foothills support denser broad-leafed species like sycamore figs, larger acacias, shepherd's trees and wild olive trees. Large mammals and an abundance of birds add to the wonder of this spectacular corner of the park. Hiking and 4x4 trails are particularly suited to this region.

The park tends to level out as you travel north and the endless vista, punctuated with rocky canyons and craggy outcrops, is captivating. A well-protected wilderness area, the only places to stay are rudimentary, no-frills, no-facilities, no-people camping grounds. A string of them wind through this area and all make the most of the spectacular northern Namib-Naukluft. The desert-adapted birds, plants, insects and mammals all make an appearance on the grassy plains and rocky knolls.

A lone crossroads settlement with a lone fuel pump, a general store and a small lodge has become an institution as much a part of Sossusvlei as Dune 45 or Deadvlei. At Solitaire even if you've just had breakfast and coffee you'll want to stop in and poke around this intriguing middle-of-nowhere-and-aptly-named speck on the horizon.

The Welwitschia Drive, in the northern extremity of the park, follows a circular route with 13 beacons signalling excellent specimens of this fascinating plant as well as lichen fields, dollar bushes, the moonscape and some interesting historical and geological sites. 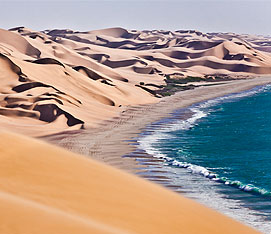