Namibia
Ever seen Namibian sands in a beach holiday advert? Thought not. This ain’t no sun, sea and sangria destination. But what a destination it is. The coastline here stretches nearly a thousand miles and offers you something totally unique. 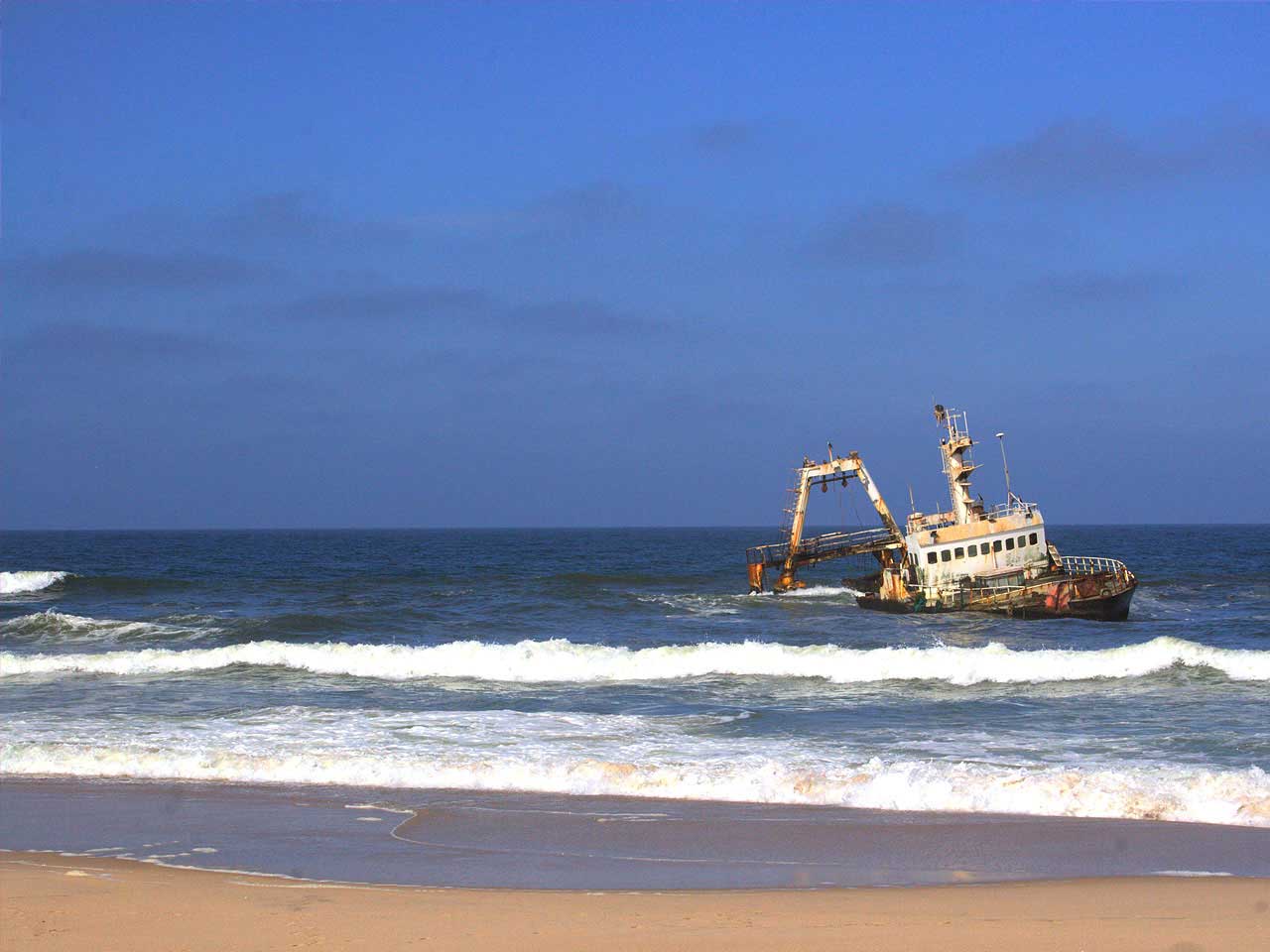 And we really mean that. For a start, you’ve got the Namib holidaying right there, beside the shoreline. A sliver of desert spanning the 1,500km from the Orange River in the south to the Kunene River and Angolan Border. Then you’ve got a sea which has claimed hundreds of ships and many more lives. Add in treacherous currents, thick sea fogs and foul smelling seals. En masse. But if you think we’re underselling this place, think again. This place is extraordinary. Nowhere on sweet Earth offers you an experience like this and Namibia knows it. So much so that they’ve designated their entire coastline a national park. Throw in the hugely popular Swakopmund and Walvis Bay and you’re laughing. Think water sports, water safaris and wet suits. Oh, and for convenience they’ve added a coastal road too. One which straddles the ocean and the desert like a tightrope from Swakopmund through the Recreation Area.

In this article we’re calling the whole Namibian coastline the ‘Skeleton Coast’ which is not strictly true.  Let’s start from the top and meander down.

That’s one eerie sounding moniker. The Skeleton Coast National Park is the northern stretch, north of Ugab River Gate and beyond Terrace Bay. A vast, brooding and impenetrable national park. Bleak too and one of the most inhospitable places in the world. Cold water and an expanse of dunes, this is the driest place in sub- Saharan Africa and the final resting place of more than a thousand rusting shipwrecks. The turbulent Benguela Current causes strong winds, shifting sandbanks and powerful undertows that have led to many a sailor's demise. It’s a true testament to the humbling power of nature's forces.

Many of the wrecks have been destroyed by the elements but some, like the Eduard Bohlen, are still visible. This is quite a sight as she appears to be stranded in the middle of the desert after running aground in 1907. There’s the Second World War’s Dunedin Star too. She left London and ended up in a heap here.

As horrible as their histories are they are strangely beautiful and atmospheric. You may also find traces of the whaling and sealing industries which lasted into the early 1900s and left real skeletons. Plus, there’s usually a plethora of seals and marine birds hanging around the wrecks too. You may even get exceptionally lucky and see desert adapted elephant, rhino and lion.

Yup, there are thousands. And thousands. Weird isn’t it. Nothing but sand, no real signs of life and then all of a sudden up to 300,000 cape fur seals. They’ve got themselves quite a colony going on here. This is Cape Cross and this is where the first European feet touched Namibian soil. They belonged to the Portuguese explorer Diego Cáo who wandered by in 1486.

The seals are a sight. Very loud, very smelly, with thick fur and luscious layers of blubber. And boy do they relish the icy waters off Namibia. The broad flat beaches work for them too - good for noticing approaching predators. Females give birth to a single pup in November/December; conceived right here the year before. You will see thousands of pups each with their own call which their mother recognises. Hopefully. They can’t swim till they’re two months old either so they’re pretty vulnerable, especially when their mothers are at sea, sometimes for days on end. Jackals and the rare brown hyena prey on them. Cape Cross is about 140km north of Swakopmund.

Now this is the place to be if you’re an angler or fancy your chances. Fishing here is excellent. Copper and cow sharks provide the sport while line fish include kob, steenbras, blackfish and blacktail. Henties Bay is 70 km north of Swakopmund and shark angling trips tend to be from November to May. You may also see smooth hound sharks and spotted gully sharks.

You'll find many rudimentary fishing camps in the recreation area up to the Ugab River, which marks the southern boundary of the Skeleton Coast Park. The beaches are wide and open and you can take your 4x4 with you. For rock and surf angling your best bet is to come from the end of January to April.

Namibia is one of the few countries in the world which is strict about shark conservation. No shark may be taken for a trophy, or be left on the beach. All sharks must be returned to the sea alive and unharmed. And remember, get your fishing permit.

4. Scoff Up Spätzle and Wolf Down Schnitzel - Swakopmund

Like a mirage Swakopmund appears to offer welcome relief from the stark desert coastline. This little gem is Namibia’s favourite seaside town, it’s also Namibia’s biggest coastal town and an ideal base for a range of adrenaline activities.

Swakopmund is unmistakably an ex-colony of the German Empire. You will see German influences everywhere from architecture, to road signs, food to beer. Lots of German cakes too. And lots of Germans, both residents and visitors. Things really boomed here until the outbreak of World War I. This interrupted the construction of the massive pier which remains one of the city's main sights. Swakopmund has mock Tudor builldings, Bavarian spires... palm trees. But just because you are next to the desert don’t expect it to be scorching here. Mornings are nippy and damp from the heavy sea mist. That’s because the heat of the desert sweeps over the cold waters of the Atlantic Ocean and a heavy, cold coastal fog forms. Still, the beach sand is soft and there is a summer holiday vibe.

The warmest months are January, February and March and the most popular time (think busiest) is from September onwards. Swakop (as the locals call it) has restaurants, bars, a museum and a delightfully small aquarium. Adrenaline activities are on the menu aplenty. Everything from kite surfing and kayaking to sky diving and quad biking. For calmer trips try a dolphin cruise or hot air balloon across the dunes.

Now this is the big guy if you like your waterfowl. The Walvis Bay wetlands and Sandwich Harbour lagoons are RAMSAR sites, in other words, wetlands of international importance. Just 35km south of Swakop is this oasis of calm. The lagoon sustains vast flocks of flamingoes, low-flying pelicans and huge numbers of waders. We’re talking tens of thousands. Most migrants fly in between November and April.

‍
The other main attraction here is the dunes. And the big one is Dune 7. It’s the tallest dune in the coastal area and yes you can climb it. In fact, please climb it, it’s a stunner but go early in the morning to avoid a beating from the sun.

Incredibly, desert-adapted flora, fauna and even wildlife is rife in the dunes. There are lichens, which are actually a symbiotic relationship of fungi and algae, the famous welwitschia grows in the desert and you could see kudu, gemsbok, springbok, steenbok, genet and wild cat.

Also, head to the salt pans to see if the lakes are pink. The water is full of plankton and the crusty salt is often rose tinted. Nicknamed the Pink Salt Lakes they are stunners and their photograph has beautified many a social media post.

You can also find adrenaline activities in Walvis Bay and there is a plethora of marine life to enjoy - either alongside in the ocean or from the comfort of a cruise.

This place is like nowhere on Earth. Huge, towering, imposing sand dunes of up to 100m literally beside the seaside. It’s sand dune - ocean, no introduction, no pleasantries. Like the sea engulfing a sand giant. This then washes into a lagoon.
You can’t even get there unless the weather and tides let you. This place is one of Southern Africa’s richest wetlands. Astonishingly, you will find a smattering of actual vegetation here. Nature has found a way, as she does. The underground aquifer quenches a band of dollar bushes and unpronounceable shrubbery along the base of the dunes.

Sandwich Harbour is 56km south of Walvis Bay. The harbour supports more than 50,000 birds in the summer and 20,000 in the winter, including Palaearctic waders and flamingos. You could also see jackal, springbok, oryx, brown hyena and ostrich.

Plant wise the !Nara plant is quite something. Endemic to the central Namib Desert, it can reach water more than 15m deep. It doesn’t have leaves but is a prickly old thing with yellowish flowers. It’s a type of melon which has been eaten locally for centuries and can live for over 100 years.

Once a literal jewel in Namibia’s crown, Luderitz is the southernmost town on the Skeleton Coast. It was also the first German settlement in the country and is named after its founder Adolf Luderitz.

It’s in the middle of nowhere - at the meeting of the Atlantic Ocean and an endless desert - and is famous for its diamond mining history. They were found in 1909 and people flocked to make their fortune.

A village was built 10km outside of Luderitz to accommodate the staff and families of the diamond company. It was called Kolmanskop. But when the diamonds dried up the community scarpered and now this place has been reclaimed by the desert. Literally. The sand fills the perfect buildings and a surreal ghost town emerges.

Like Swakopmund, there’s still a huge German influence in Luderitz. German architecture, street names and bratwurst. There’s a museum too which focuses on the diamond mining past as well as local and natural history. Halifax Island is nearby, a place cormorants and African penguins call home. And seals and pelicans live on the Shark Island peninsula.

Luderitz is also a windy place which attracts the world’s fastest kitesurfers in an annual speed challenge on a purpose-built run. Button down your hat and coat.

Oh, and here’s a final point to muse over... diamonds are still found here, not in the desert but in the sea. All that wind has blown them in and they’ve ended up on the ocean floor. Fishermen here use nets and rods in their search for treasure. Let us know if you get lucky... then treat yourself to a super yacht.