The appeal of Pezulu Tree House Lodge is rather obvious: the tree houses. Built into and around the trees, they spell out romance and excitement in every language. Don't think extreme luxury, think extreme living high, high, high. Roots in the earth, branches in the sky. This place is rustic. 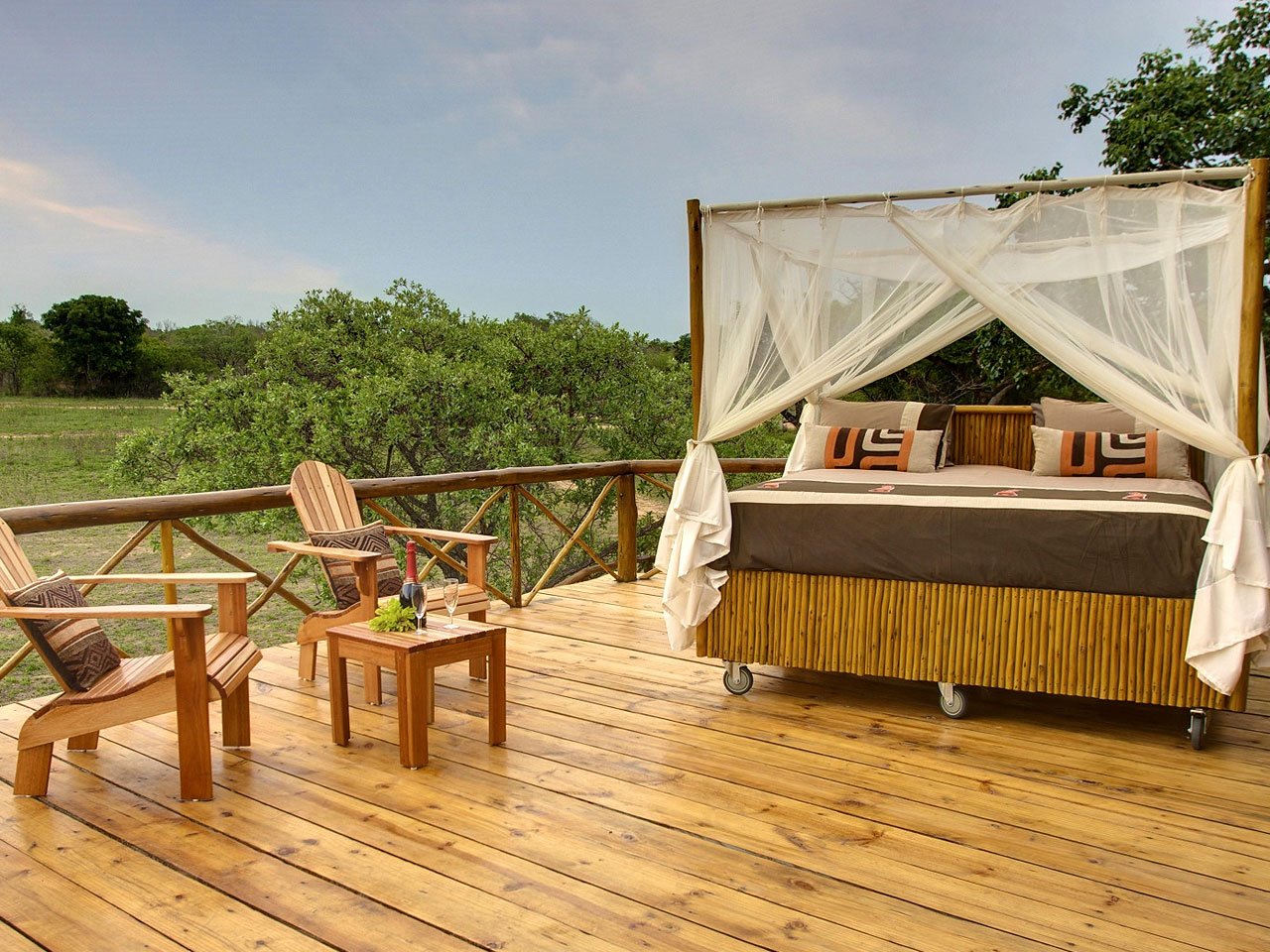 Even the thatched main building of the lodge is interweaved with a large Marula tree. Go with the flow and daydream that you’re an explorer. Lost in the extremes of nature. If you wake up with a start remember this. You’re not really lost. You’re actually near the Panorama Route and the Kruger National Park. Ah yes, phew. Night night. Tomorrow we hike.

Do you remember spending summers climbing trees? Making bases, making camps, making your first home. The tree house is probably the oldest of human shelters. The one which protects you, hides you, shelters you. In literature, they’re all magic and enchantment - think Tolkien’s Ents, Blyton’s Faraway Tree and Dr Seuss’s Lorax and the Truffula trees. There’s just something so appealing about them. Kids want to sleep in them and adults do too, when they think like a kid again. And, seeing as there’s nowhere quite like Africa, go sleep in one here. Here in the Limpopo Province. Listen. Can you hear it? That’s the language of the wild.

There are four of them - the first two with great names - Jackalberry and Falsehorn, the other two sound like an afterthought - Teak 1 and Teak 2. But hey, it’s only a name.
Jackalberry sleeps 3 and has one bedroom with a double bed and a single bed. There’s an outdoor shower and a balcony to view game. Yup. Giraffes have been know to wander by. Mornin’

Falsethorn sleeps 5. Two bedrooms, one with two singles and one with a single and a twin. Outdoor shower and a private veranda. Watch game, watch birds.

Teak 1 sleeps 3. There’s one three bedroom with a double and a single. Outdoor shower and an outdoor deck.

Teak 2 sleeps 4. Two bedrooms - one with a double the other with two singles. Outdoor bathroom and shower and an outdoor deck.

The Superior Tree Houses sleep 10. There are two of them - Bushwillow and Knobthorn.

Bushwillow sleeps five. Two bedrooms - one with a double bed, one with three singles. Indoor bathroom with a corner bathtub. Outdoor shower. There’s also a patio and a viewpoint overlooking a private water hole.

Knobthorn sleeps 5. One large bedroom with a partition. There’s a double and three single beds.  This one has an indoor shower and a patio to watch the sunset.

The Luxury Family Tree House accommodates 6 people. Called Marula it has two big rooms. One with a double and a single and one with three single beds. There’s an indoor bathroom and an outdoor shower. This beast has two outdoor decks – think game viewing, view viewing and sunset staring.

The Honeymoon Tree House is called the Drunken Parrot. It’s high in a huilboerboon tree and split over two levels. The two of you will have a King size bed and a sunken bath overlooking the bush. There’s a balcony with hanging chairs overlooking a private waterhole for game viewing. Happy honeymoon.

The Luxury Honeymoon Tree Houses can accommodate 4. What? 4? Yes, yes but not all in one house. There are two. The Mountain View Tree House is not for the faint hearted. It’s 7 metres up in a jackalberry tree. The views rock. You’ll have King sized bed, a jacuzzi bath, an outdoor shower and a deck. And from here you can see the sunset and the Drakensberg Mountains. And finally, there’s the Dream Tree House. A luxurious canopy dwelling interweaved through two growing Marula trees. There’s a four poster king sized bed on wheels so you can sleep inside or under the stars. Nice. A lounge, jacuzzi, outdoor shower and a veranda overlooking a waterhole. Gorgeous game viewing, stunning views, gorgeous, stunning honeymooning lovebirds. Tweet tweet.

Plenty to do. You can go on a morning or dusk guided bush walk. A night drive is worth it too as many animals are, of course, nocturnal.

If you’ve gone all zen after all this tree house living you can plant a baobab. They can live for thousands of years. You’ll get the tree’s GPS coordinates and a certificate – and you know you want that. Hug a few trees whilst you’re at it.

Fancy being a ranger? There’s a course on offer so you can channel your inner bushman. Kids can join in too - on the Junior Ranger Course.

Being so remote this is also a great place for stargazing.

Pezulu has it’s own bee hive so you can learn about bee keeping too.

It’s definitely worth exploring the Manyeleti Game Reserve. The big five roam here. You’re also near the Kruger National Park and the lodge can take you on a day tour there.

Then there’s the Kinyonga Reptile Park and the Hoedspruit Endangered Species Centre.

You’re also close to the Panorama Canyon Route which is a spectacular green canyon. And there are activities to do on Blyde River.

If you’re honeymooning, treat yourself to a hot air balloon ride or do something unique like flying in a helicopter with the guys that patrol the skies looking for rhino poachers. You’ll fly through the canyon as you track Africa’s great, armoured giant. 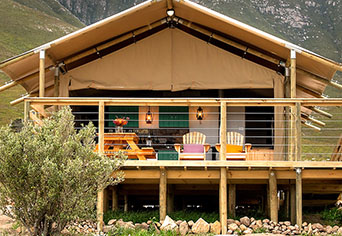 This is the first Africamp outside the Western Cape. Africamps are working farms and estates run by people with passions for wildlife and a desire to show how their daily life rolls.
Our review of this property has not yet been added. Watch this space. We're working on it. 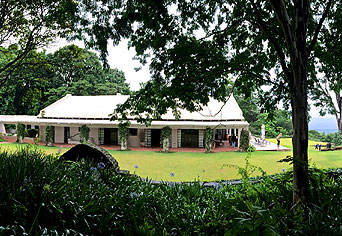 Picture painted skies, greener than green lawns, cobblestone walls and trickling fountains. A magnificent manor house under pink blushing trees and postcard views onto the distant mountain valleys of the Northern Drakensberg. Kings Walden Garden Manor is charming beyond words.
Our review of this property has not yet been added. Watch this space. We're working on it. 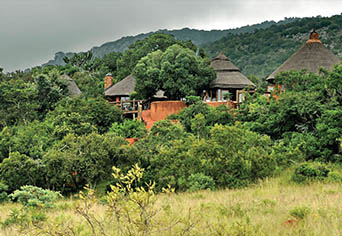 Set on top of the Soutpansberg Mountains within a 2600ha private game reserve, this is a family run, mountain retreat. Giraffe, zebra, rare brown hyena and leopard. Clay sculptures. Wood carvings and when you bathe, a sculpted girl bathes beside you. When you shower, your soap lies in a sculpted hand. Art shading your life. No electricity and phone reception and WiFi in short supply. You will climb above the clouds, you will be cut off. With a bit of luck, you will sleep like a baby.
Our review of this property has not yet been added. Watch this space. We're working on it.