Eningu The Clayhouse Lodge: there's the lodge, standing in the bush savannah. On a 65 hectare farm in the western Kalahari, about 100km from Windhoek. Home to leopard, wildebeest and porcupine. Such a prickly rodent that one. Inside it's all handmade carpets, hand painted floors, carvings and stone furniture. It's arty and rustic with recycled pipes and tin cans. There's a roof terrace too. Or just enjoy your patio. As the sun sets over the Namibian bush. 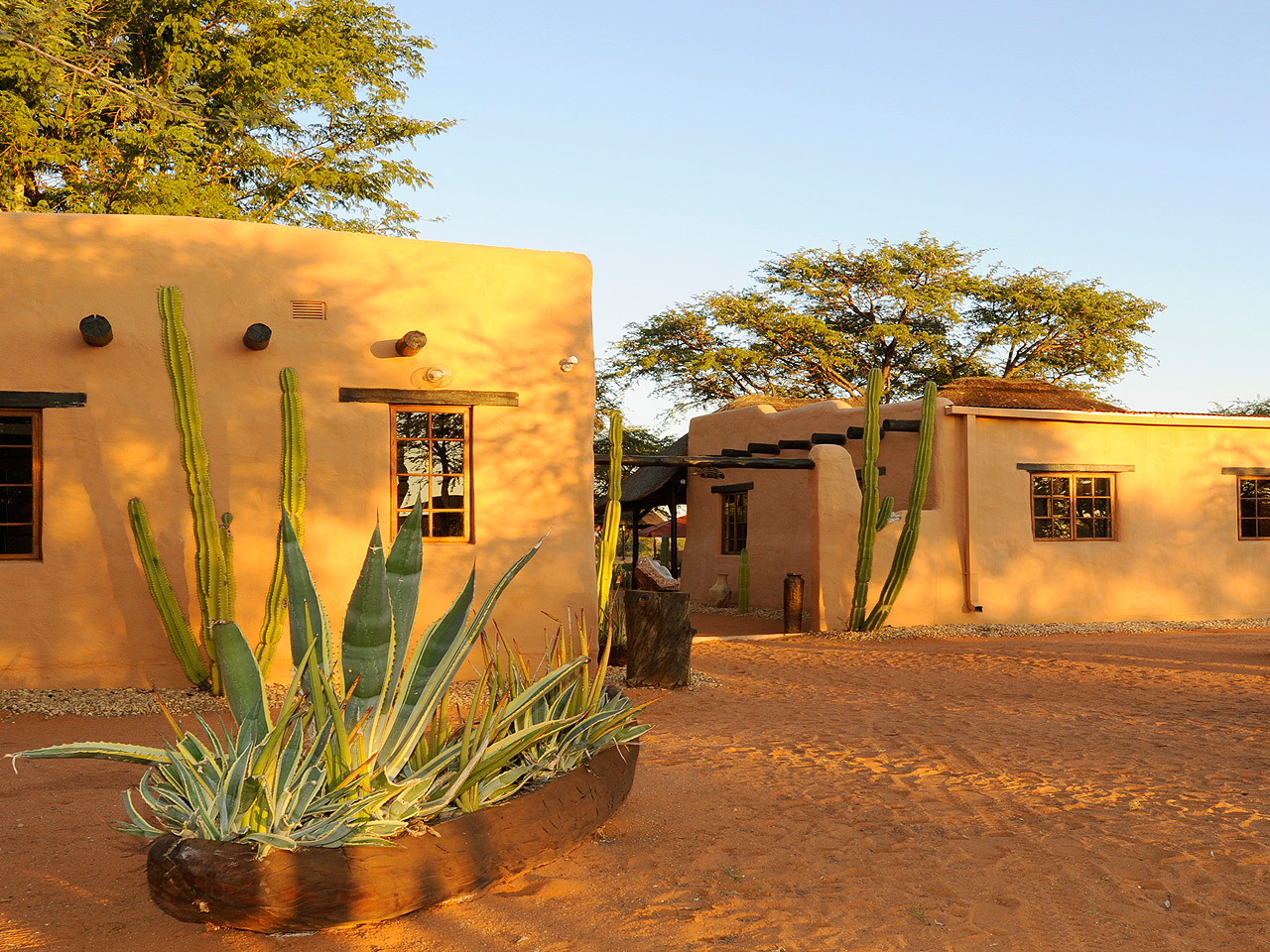 O, wonder! How many goodly creatures are there here! How beauteous mankind is! O, handmade clay bricks! O, 120,000 terracotta ones! O, how they blend into the rouged Kalahari sands! Ok, we've stopped. This place wasn't founded by a Shakespearean clown but it is unique, it is red and it is the product of two artists. There's a red floor inside too and hand-painted porcupines. O glorious quill pig! No joke. That's the Latin name. Shame. Useless bit of trivia, 'The Porcupine', was the name for Eningu when it first opened in 1994.

9 rooms. There are doubles, triples and a family room which can sleep up to 4. They all have en-suite bathrooms with showers, ceiling fans and desks.

It's all rather artily decorated. Not that that's a word but it does convey the stench of creativity. There are sculptures and art works, hand painted floors and antique furniture.

Think red, red, red. Or terracotta. Some say the tiles are maroon? Hmm. Shades to muse on. Most of the rooms are set up in pairs in low buildings with heavy thatched roofs. Some share a porch. There's a ceiling fan for summer, an electric wall heater for winter.

There's a recycled vibe too with old pipes used as towel rails and mirrors with tin-can surrounds. It's all pretty eclectic. One room has a small, triangular table suspended between three branches which houses the tea and coffee-making facilities. Cool.

The family room is much larger than the other rooms and is more private. It has its own sitting room and a small garden area with hammocks.

Visits to local craftspeople and a nature drive around Eningu's own slice of the Kalahari are possible, as well as a tour of a nearby farm.

There are well marked hiking trails through the Namibian savanna. The botanical hiking trail will take you through a variety of vegetation. It'll take 6 hours so you'll have a picnic but maybe take a shed load of snacks too.

You can go on game drives but don't expect to see any big game here. This place is more about chilling in the beautiful scenery.

The hide near the waterhole is a good spot for doing nothing. Porcupine often wander by in the evenings. Who can blame them? Kitchen scraps are left out for them. Bird wise you may see white backed vulture, secretary bird, tawny eagle, homophone and blacksmith plover. Animal wise look out for kudu, duiker, cheetah, wildebeest and leopard.

You can do archery on site or play volleyball and badminton.

A must for those interested in art is a visit to the sculptor Dorte Berner, whose home is about a 15-minute drive away. The lodge can arrange a private tour of her exhibition. 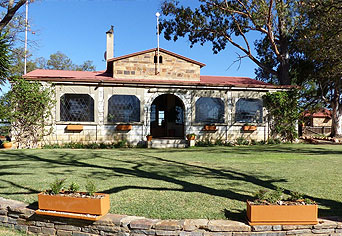 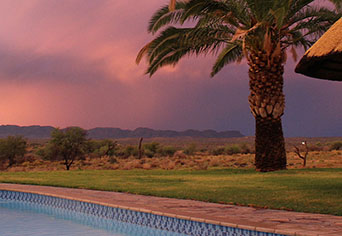 Auas Safari Lodge is just outside Windhoek and close to the international airport offering a Namibian bush experience from the moment you arrive or up to the last moment before you leave.
Our review of this property has not yet been added. Watch this space. We're working on it. 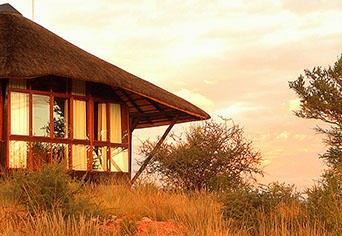 GocheGanas Lodge is a luxury wellness spa and private game reserve just outside Windhoek but worlds away from the hustle and bustle.
Our review of this property has not yet been added. Watch this space. We're working on it.