South Africa
There are nine provinces in the country and this one’s the baby of the bunch. Known as the “place of gold”. Oft the most doted upon. Loads live here with Johannesburg being South Africa’s largest city. 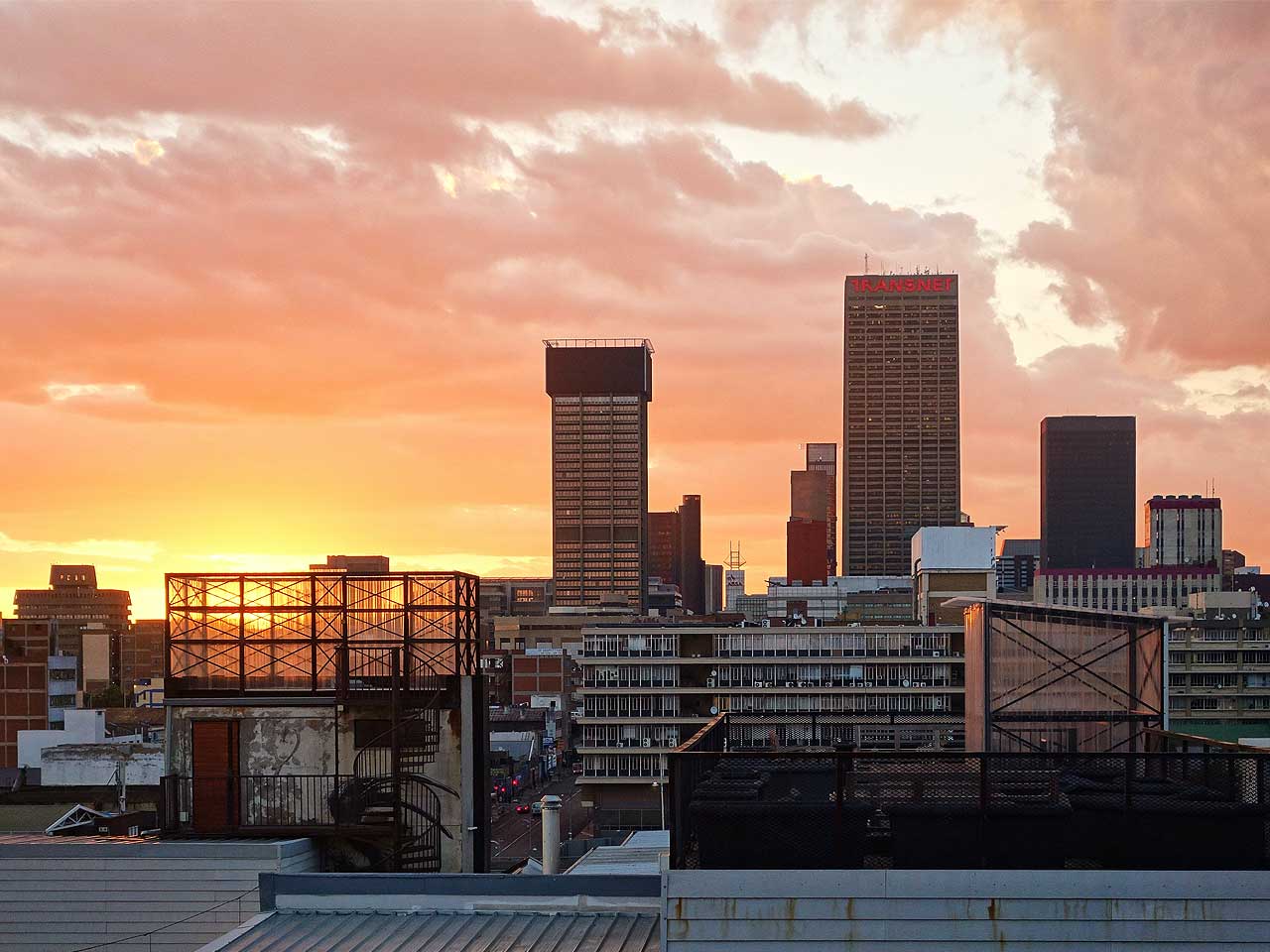 Gauteng. It means ‘place of gold’ in Sotho-Tswana. What could be more gorgeous, more glittering, more regal than gold. We trade it, wear it, damn it we even eat it. So when gold was discovered here in the late 1800s people rushed in. Pickaxes a ready. The world’s largest gold rush had begun and South Africa would never be the same.

Joburg. Funny to think this great sprawling metropolis started life as a little biddy farm. Life on the farm was kinda laid back until one day, woah, a massive gold reef popped up. In ten sweet, sparkling years a hundred thousand people turned up and decided they were home. And now, after Cairo, it’s the second largest city on the African continent. It’s also South Africa’s chief industrial and financial hub and an entertainment mecca. There’s a creative vibe with street art, photographers, musicians and architects producing world-class work.

Joburg likes a bit of grandeur, it likes to be number one, top dog, the golden boy. It has a mammoth man-made forest, a humongous hospital and the tallest building in Africa. So, that’s 10 million trees, a hospital for three and a half million and a tower 270 metres tall. The trees help with greenhouse effects and lower noise levels and the Hillbrow Tower is the Mount Olympus grandly overlooking the lot. There’s the Walter Sisulu Botanical Gardens, Zoo Lake, Melville Koppies, and Emmarentia. All of these parks are jolly and joyous with their dandy gardens and walkways. Jaunt away. Take a book. A blanket. And wine.

Pretty little Pretoria with its boring job as administrative capital, reliable and gorgeous, turning purple to the beat of thousands of swaying jacaranda trees. From September to November they go blooming crazy. An antidote to the government suits. Take a drive through any of the old neighborhoods, such as Groenkloof, Lynnwood, Waterkloof or Arcadia, to see the flowers at their best.

Nature reserves are nearby too, as is the largest shopping mall in Africa. There are mountain bike trails and golf courses as well as the familiar pleasures of good cafes and restaurants.

Gauteng isn’t the most obvious province if safari’s your bag but it shouldn’t be overlooked. If you’re Pretoria way, the Voortrekker Monument is in a nature reserve, Groenkloof Nature Reserve is also good, whilst Rietvlei is home to four and Pilanesberg National Park to five of the Big Five. Hyena and cheetah abound in the Suikerbosrand Nature Reserve, and funnily enough you should spy rhino and lion at the Rhino and Lion Nature Reserve. For bird watching try Marievale Bird Sanctuary.

Gauteng has plenty if you like to feel adrenaline coursing. You can waterski at the Vaal River or head to the Magaliesberg mountain range to fish, hike, rock climb, abseil. Be nice to squeeze in a jolly marvellous hot air balloon ride too.

Gauteng Province is an embarrassment of riches if you’re talking culture and history. Johannesburg has the superb Apartheid Museum and Constitution Hill.

The Apartheid Museum gives the background of colonisation and describes the evolution of racial segregation. It’s excellent as well as being, understandably, emotionally draining.

Constitution Hill is a living museum which used to be a prison and is now home to the country’s constitutional court.

If you likes the arts or you’re simply feeling inspired and bohemian, check out Newtown. It’s one of those places that’s been so rundown it’s become an artist’s playground. Now, regeneration work is helping to open it up to the masses. It’s in Johannesburg’s inner city, it’s buzzing and, thankfully, colour blind. Artists of all races hang out getting more and more arty as the day wears on. Theatres, art galleries, museums, restaurants, book shops, craft markets, clubs and cafés. It’s got a politically turbulent past and, due to its multiracial diversity, it was the scene of some of the first forced removals in Gauteng implemented by the apartheid government. Look out for the Market Theatre which is known for its role in the fight against apartheid as the “Theatre of the Struggle”. Museum Africa is also worth a look. Southern Africa’s largest science centre is in Newtown as is the SAB World of Beer which is very popular and chats away about the history of brewing.

Then, of course, there’s Soweto. It too grew after gold was found. Now it’s a symbol of the New South Africa, caught between old squatter misery and new prosperity, squalor and an upbeat lifestyle.

The Nelson Mandela National Museum, commonly referred to as Mandela House, is where he lived from 1946 to 1962. It’s in Soweto on Vilakazi Street.

Pretoria is home to South Africa's version of the White House - the Union Buildings. And out front? Arms wide open. There he is. The Father of the Nation, Madiba himself, Nelson Mandela. All nine bronze meters of him.

There’s also the Voortrekker Monument which commemorates the Voortrekkers or Pioneers who left the Cape Colony in their thousands between 1835 and 1854. It’s one of the most visited heritage sites in South Africa. Don’t forget to get a lovely photo of old Piet Retief, one of the Voortrekker leaders, there’s a 4 metre statue of him nestled on the steps. Clubbed to death by the Zulus, poor old Piet.

And then there is the Cradle of Humankind, a sweet little lump of grass and joy and one of eight World Heritage Sites in South Africa. It’s basically lots of caves which have, over the years spewed almost half of Planet Earth’s human ancestor fossils. It’s one of the richest archaeological sites in the world. The Sterkfontein Caves is the big guy, famous fossils were excavated here. You can see their replicas in the Maropeng Visitor Centre.