Botswana
The eastern region of Botswana is highly regarded by safari insiders for its very wild wildlife against a backdrop of imposing cliffs and enormous trees. If we tell you it’s nicknamed the Land of Giants you’ll get the picture. Anything else? 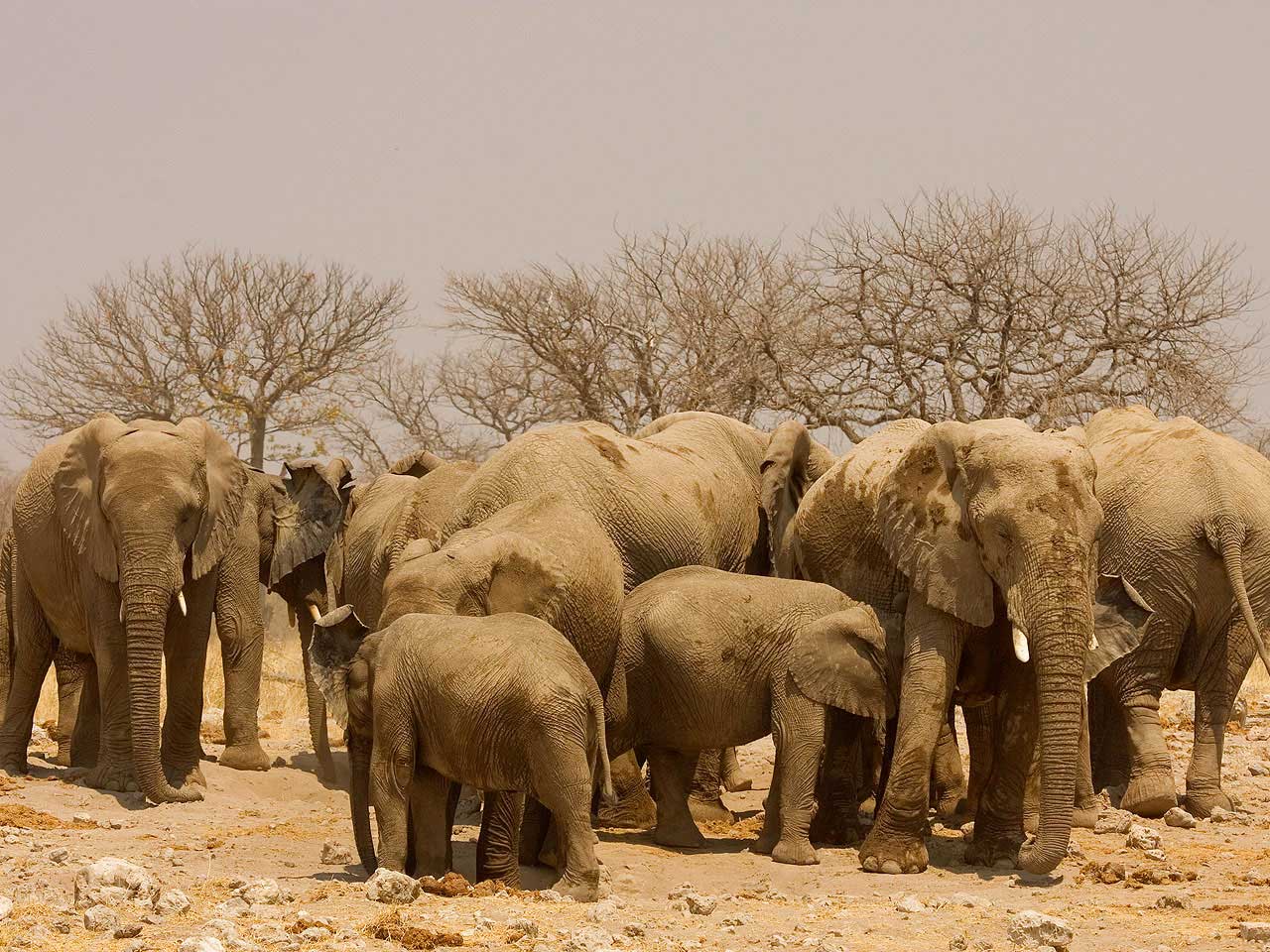 People. This is the heartland of the local Batswana, in fact it’s the most densely populated corner of the country, which to be fair is hardly dense at all.

History too. Steeped in it, and home to some of the most significant paleontological and archaeological remains on the subcontinent.

Then we have Botswana's most important rhino sanctuary and the seriously special Tuli Block. A definite contender for ‘oh, what a wonderful wildlife destination’... this place has long been overlooked and if you need a nudge to check it out, we’re nudging now.

This article explores why travelling east in Botswana is a good idea.

So, let’s start this article in Tuli. You can’t get more eastern than Tuli. The block is actually a strip of land which juts out between South Africa and Zimbabwe and it’s quite different from anywhere else in Botswana. Picture massive trees, rocky outcrops and red sand for starters.

East of east is known as the Northern Tuli Game Reserve. Here there’s more than 700km square of privately owned land including the Mashatu Game Reserve and Tuli Safari Lodge.

Sitting between the Limpopo, Motlouse and Shashe rivers, Tulie has lots of animals. Get your guidebooks out and start ticking off elephant, kudu, impala, wildebeest, giraffe, lion, zebra and leopard. And think big numbers, Tuli boasts the largest herd of elephant on privately owned land in Africa. They’re clearly as enamoured with this place as we are.

Mashatu shares unfenced borders with both the South African and Zimbabwean national parks in the south and north respectively. This vast area forms part of a cross boundary wildlife conservation area protecting the substantial biodiversity of fauna and flora in this region. As well as animals there are over 350 bird species.

And, whilst the rest of Botswana is flat, Tuli comprises huge rock formations and hills in the east. It’s a savannah landscape, Namibia-esque at times, and there are lots of baobab trees - the famous ones that are, frankly, upside down. Sorry trees but you are.

The rock formations in the Tuli region exist because Tuli lies along a fault line in the Earth's crust. Geologists will be chuffed. In fact, Tuli has lots of archaeological and historical sites. For tens of thousands of years the San hunter-gatherers lived here. They left behind rock art aplenty: a Stone Age Instagram account with a gazillion views, likes and shares. About 2,000 years ago the Iron Age settlers muscled in and you can see their remains too - pottery shards, beads, smelting relics and even the occasional granary

We’re still in the Tuli Block but we thought we’d give Solomon’s Wall it’s own paragraph. It really is a remarkable geological feature. It’s the remnants of a 30m high basalt dyke which once formed a natural dam wall across the Motloutse River, holding back a great lake. The two ends still guard each side of the river valley. You’ll need a 4x4 to get here but it’s worth it.

Near Solomon's Wall are the Motloutse Ruins, once the royal dwelling of the Leopard Kopje Dynasty. The Dynasty was renowned for its Iron Age mining power and complex processes to mine gold and other metals. The old stone walls of the ruins are still considered sacred by some locals who dare not encroach.

Now this is for you if you’re interested in rhino. These odd-toed ungulates have been an important part of a wide range of ecosystems for millions of years. Now humans have led to their catastrophic near-extinction. The Khama Rhino Sanctuary was created in 1989 to conserve Botswana's dwindling horned dwellers.

There are over 30 white and two black rhino at the reserve and, unsurprisingly, it’s one of the best places in Botswana to see white rhino. They’re the result of an intensive reintroduction and breeding program over the last 20 years. Major celebrations were held when the first baby black rhino was born in 2008. The park has also reintroduced rhino into many surrounding reserves and parks. The Moremi Game Reserve as well as Makgadikgadi and Northern Tuli Game Reserve have all received rhinos. Due to the threat of poachers, the sanctuary is patrolled by the Botswana Defence Force who are based just outside.

The 4,300 hectares of land  the sanctuary covers is also home to more than 30 other game animals and 230 bird species. Khama Rhino Sanctuary Trust also provides economic benefits to the local community through tourism. You can stay here in self-catering accommodation or you can camp. You can also join guided game drives in the day and at night. It’s a great opportunity to see animals such as leopard, hyena and caracal.

It’s not far from Francistown, Botswana’s second city, and is about 25km outside of Serowe, one of the largest traditional villages in Africa.

And seeing as we’re now so close to Serowe let’s go there next. Death and relics may not be the most inspiring title but the Royal Cemetery and the Khama III Memorial Museum are both worth a mention.

The cemetery is at the top of Thathaganyana Hill and it contains the graves of the Khama dynasty. First there’s Sir Seretse. He was the founding father of modern Botswana and lead his country's independence movement. In 1966 he became the first president.

Then there’s Khama III’s grave which is marked by a bronze duiker (a small antelope), which is the Bangwato totem. Please note that you do need permission from the police station in the barracks house to come here.

After visiting, if you want to find out more about the Khama family’s role in Botswanan and indeed Southern African history, head to the Khama III Memorial Museum in town. It also gives you an insight into Batswana culture, San people as well as African insects and snakes.

We’re not kidding these hills are old, seriously old. They rise almost four hundred metres above the surrounding plains and are 20km wide. They’re sandstone, ironstone and quartzite.

It was once a home for big game but now you’re more likely to see mammals such as rock dassies, baboons, brown hyena and leopard. Over 350 species of birds have been recorded in the area, including the endangered Cape Vulture, the Black Eagle, the Black Stork and the Meyer’s Parrot, as well as over a hundred butterfly species.

There are also a series of waterfalls and lagoons. It’s lush and lovely.

Plus, some of the earliest traces of Bantu speaking people in Southern Africa have been found in the gorges at Tswapong. Fragments of pottery dating back to the first millennium have been found. As have iron smelters and rock art.

Talking of gorges, one of the main attractions of the Tswapong hills is the Moremi Gorge. It’s a climb to reach but you’ll find the source of three permanent waterfalls. The first two are smaller, but fan out into large waterholes, the big guy is 10m high.

It’s so special that the Moremi Gorge is a designated National Monument and is managed by the Department of National Museum, Monuments and Art Galleries. The area also holds great religious and spiritual importance to the community.

At the foot of the Tswapong Hills is Old Palapye, an important multicultural historical site containing artefacts from the Middle Stone Age, Late Stone Age and Early Iron Age. In the 19th century it was the capital for the Bangwato people who were led by Khama III. When water supplies dwindled they left and eventually established their new capital at Serowe, where it remains today.

At the site you can see stone walls, the remains of stone rondavels and rock paintings, as well as the remains of a prison, market centre and historic graves. There’s even the remains of the London Missionary Society Church, which was built between 1891 and 1894.

Baboons, vervet monkeys, porcupines, rock dassies and leopard live here and there are a couple of Cape vulture breeding colonies too.

Top of Eastern Botswana is one of the oldest towns in the country and the site of southern Africa's first gold rush, Francistown. It’s not the most inspiring place but it’sa handy re-fueling hub often used as a stopover.

The Supa-Ngwao Museum is in the 100-year old Government Camp. Here you’ll find a prison, police canteen, and displays about local and regional culture and history. They’re not extensive but certainly enlightening.

So, you see, the east is worth it. Botswana is one of Africa's greatest wildlife destinations and the east has it all - bushmen, boababs and big beasts. And don’t forget, ‘overlooked’ also means fewer tourists... win-win.